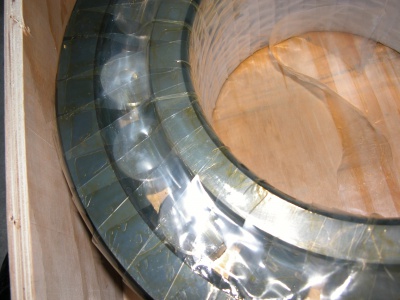 USA – Recently a huge 26” OD spherical roller bearing weighing massively 1,259 lbs was about to be shipped from China to Brazil – but luckily the fake bearing was seized by the US authorities. The bearing was detained by U.S. Customs and Border Protection (“CPB”). They inspected the shipment and had several suspicions with both the bearing markings and labeling.

Due to the established relationships between the CBP and the WBA anti-counterfeiting team, the CBP contacted the manufacturer and inquired about the suspect bearing. Images of the bearing markings and suspect labeling/packaging were sent for review to the claimed manufacturer. After reviewing several images, the manufacturer determined that the roller bearing was in fact counterfeit. The bearing was etched and labeled as a high performance series in which the manufacturer did not produce in that size. Additionally, the number of rollers, along with their shape and size, was inaccurate. All of these issues together confirmed suspicion that the product should absolutely remain detained and not continue the voyage to its final destination.

Immense loss for the end-user
Had the part not been scrutinized by the CBP, it would have shipped to the end-user and potentially been installed into a sugar mill gearbox in Brazil. “If installed into the application, major damage could have occurred shutting down operations, incurring tremendous maintenance and downtime cost, or in the worst case could have caused injuries. Additionally, the cost of the bearing and the bearing itself was a loss for the end-user,” states a spokesman of the WBA anti-counterfeiting team and adds: “The large single roller bearing cost is considerable, sometimes nearing 6 figures this represents a rather large investment for the mill to make. There was potential for the cost to be exponentially higher had the bearing been installed and failed, causing downtime and possible damage to other plant equipment.”