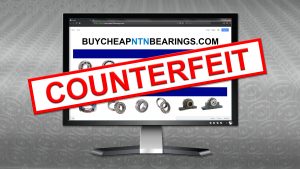 Several companies have copied the web site of NTN Corp. almost word-for-word and image-by-image.  Therefore, in 2018, NTN launched a crackdown on these fake web sites with several successes in China, although it is sometimes difficult to determine the actors behind the fake sites.

NTN won a lawsuit at the People’s Court of Shanghai Xuhui District after a company rush-registered and operated the domain name “ntn.tw,” which constitutes trademark infringement and unfair competition against NTN.  The court ordered the company to compensate NTN for economic loss of about RMB 250,000 and to publish a statement in the local newspaper to correct any unlawful association with NTN.

NTN will continue to strictly crack down on the rush-registration of domain names, fake web sites and other acts that infringe NTN’s trademark rights.  Additionally, NTN publishes lists of authorized distributors on its web site.  Any company whose name is not on an authorized distributor list is not an official seller of NTN’s products and it should not advertise that it is an NTN sales agent.

Meanwhile, NTN will continue to provide customers with safe and secure products. Please search for authorized NTN distributors and be wary of suppliers who do not provide genuine NTN products.  If there is ever a question about authenticity, please refer to the “Buy Safely” section of this “stopfakebearings.com” web site for further information.