An Innovative Tool in the Fight Against Counterfeiters 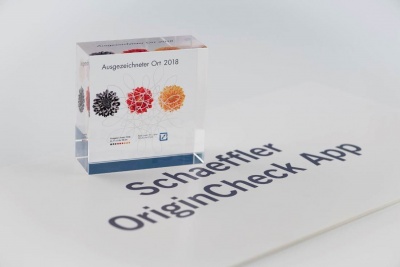 The OriginCheck app launched by Schaeffler in 2017 was one of 100 ideas selected. This app allows buyers of INA and FAG products such as rolling bearings to carry out initial authenticity checks both quickly and easily, and initiate further steps to obtain proper clarification without complications if any suspicion arises. In this way, the jury concluded, the app benefits the general public by helping to fight product piracy and providing increased protection against potentially harmful counterfeit products.

The checks are carried out based on the GS1-standard data matrix codes (DMCs) that are placed on the Schaeffler packaging and allow the product to be identified worldwide with no overlaps. The user scans this DMC with the OriginCheck app and immediately receives notification of whether the code has been found in the database that is maintained by Schaeffler. When suspicion arises, the app helps the user to create suitable photographic documentation of the product being checked and e-mail this documentation directly from the app to the Brand Protection Team, Schaeffler’s central department responsible for combating product and brand piracy.

Since 2004, the Brand Protection Team has been handling suspected cases in collaboration with customs and authorities, and it consistently develops additional measures to protect against product piracy and trademark infringements. Schaeffler inspected over 700 suspected cases in 2017, some of which were reported using the OriginCheck app, allowing goods with a total retail purchase value of five million euros to be seized and destroyed under supervision worldwide. The app allows end customers and retailers to better evaluate the sources from which they procure components, which in many cases are safety-relevant, and provides increasing support in tracking down suppliers of counterfeit products.

At the EU level, rights holders such as brand product manufacturers are continuously working with customs and authorities to simplify and accelerate the exchange of information that are relevant for the detection of counterfeits. Schaeffler has been part of the steering committee for the development of the Enforcement Database at the European Union Intellectual Property Office (EUIPO) since 2013. Rights holders use this database to supply product information and contacts to the European authorities in order to make it easier to identify counterfeits and initiate the appropriate measures. The OriginCheck app and all of the required information are available here for the authorities to use, and the app is also demonstrated at various joint events, such as the Enforcement Database Forum taking place in Alicante (Spain) in mid-June.

The OriginCheck app is available free of charge for iOS and Android operating systems in German and English: www.schaeffler.com/en/apps